Daughter of the Gods 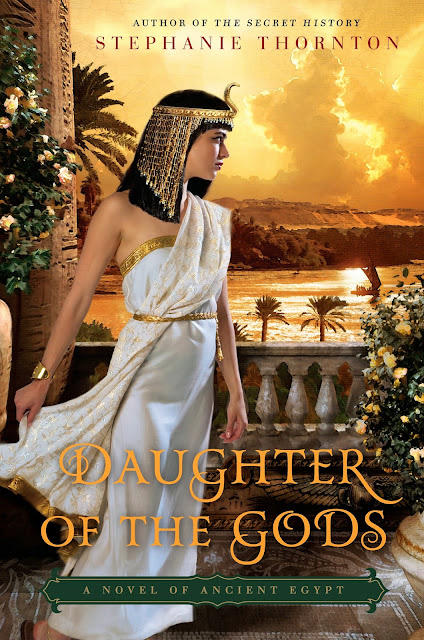 Order Daughter of the Gods: A Novel of Ancient Egypt
Amazon
Barnes and Noble
IndieBound
The Book Depository


Egypt, 1400s BC. The pharaoh’s pampered second daughter, lively, intelligent Hatshepsut, delights in racing her chariot through the marketplace and testing her archery skills in the Nile’s marshlands. But the death of her elder sister, Neferubity, in a gruesome accident arising from Hatshepsut’s games forces her to confront her guilt...and sets her on a profoundly changed course.

Hatshepsut enters a loveless marriage with her half brother, Thut, to secure his claim to the Horus Throne and produce a male heir. But it is another of Thut’s wives, the commoner Aset, who bears him a son, while Hatshepsut develops a searing attraction for his brilliant adviser Senenmut. And when Thut suddenly dies, Hatshepsut becomes de facto ruler, as regent to her two-year-old nephew.

Once, Hatshepsut anticipated being free to live and love as she chose. Now she must put Egypt first. Ever daring, she will lead a vast army and build great temples, but always she will be torn between the demands of leadership and the desires of her heart. And even as she makes her boldest move of all, her enemies will plot her downfall....

Once again, Stephanie Thornton brings to life a remarkable woman from the distant past whose willingness to defy tradition changed the course of history.


Praise for Daughter of the Gods
“A wonderfully intimate and dramatic evocation of ancient Egypt, where one headstrong young woman dares to become pharaoh. Stephanie Thornton vividly portrays the heat and the danger, the passion and the heartbreak …A touching love story combines with a thrilling tale of death, courage and political intrigue to produce a superbly researched and powerfully written novel. This is the kind of book that grabs you by the throat and doesn't let go. A remarkable story, remarkably told.”—Kate Furnivall, author of Shadows on the Nile and The Russian Concubine

“An epic saga that brings ancient Egypt to life with vivid imagery and lovely prose. Stephanie Thornton is a rising star!”—Stephanie Dray, author of Lily of the Nile

“Hatshepsut crackles with fascinating complexity.”—Vicky Alvear Shecter, author of Cleopatra’s Moon and Curses and Smoke: A Novel of Pompeii

“Stephanie Thornton's heroines are bold, brave, and powerful—they make me want to stand up and cheer.” —Kate Quinn, author of Lady of the Eternal City