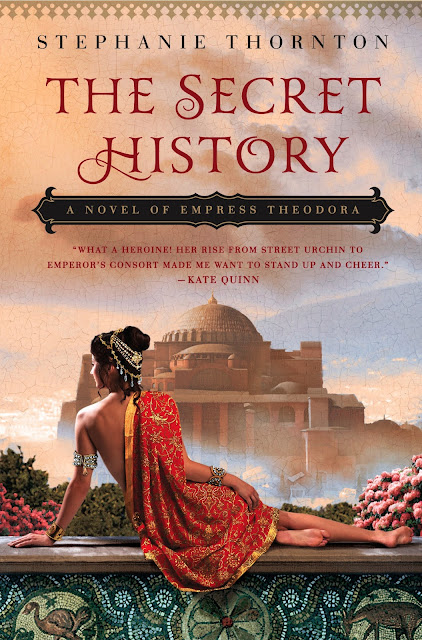 In sixth century Constantinople, one woman, Theodora, defied every convention and all the odds, and rose from being a common theater tart to become empress of a great kingdom, the most powerful woman the Roman Empire would ever know.  But the woman whose image was later immortalized in glittering mosaic was, in fact, a scrappy, clever, conniving, flesh-and-blood woman full of sensuality and spirit whose real story is as surprising as any ever told…

When her father dies suddenly, Theodora and her sisters face starvation on the streets.  Determined to survive, Theodora makes a living any way she can—first on her back with every man who will have her, then on the stage of the city’s infamous amphitheater in a scandalous dramatization of her own invention. When her daring performance grants her a back-door entry into the halls of power, she seizes the chance to win a wealthy protector—only to face heartbreak and betrayal.

Ever resilient, Theodora rises above such trials and by a twist of fate, meets her most passionate admirer yet: the Emperor’s nephew.  She will thrive as his confidant and courtesan, but many challenges lie ahead.  For one day, this man will hand her a crown.  And all the empire will wonder—is she bold enough, shrewd enough, and strong enough to keep it?


Reviews for THE SECRET HISTORY

“Stephanie Thornton’s Theodora is tough and intelligent, spitting defiance against the cruel world of the Byzantine Empire. Her rise from street urchin to emperor’s consort made me want to stand up and cheer. Her later years as empress are great fun to read, but it was her early struggle as actress and courtesan that really had me roaring: either with rage at the misfortunes heaped on this poor girl, or with delight as she once more picked herself up with a steely glint in her eye and kept on going.”—Kate Quinn, author of Empress of the Seven Hills

"A fascinating and vivid account; in The Secret History, the life of Empress Theodora leaps from the page, as colorful and complex as the woman herself."—Michelle Diener, author of The Emperor's Conspiracy

"If there is one book you choose to read on ancient times, let it be The Secret History. Theodora is a true Byzantine icon, and her story is a timeless inspiration that needs to be heard." --Historical Novel Society

"While Empress Theodora’s story unfolds in what is today modern Turkey, one could borrow from the cowboy vernacular and say that Thornton’s well-conceived and engrossing tale exalts a historical figure of “true grit.” Fans of Stella Duffy’s The Purple Shroud and Theodora: Actress, Empress, Whore may want to check out Thornton’s take."—Library Journal Review

"This story tore out my heart and taped it back together just to tear it to sheds at the end. But I loved it! I really love that the book includes not only a note from the author about Theodora, but also a Reader's Guide so it is ready for any book club to use!" --Night Owl Reviews