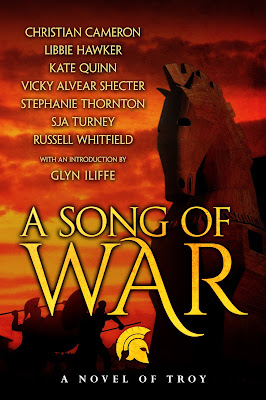 It's cover reveal time for SONG OF WAR! Isn't she a beauty?!

The novel goes on sale October 18th, but it's available for pre-order at both Amazon and Kobo. You can also add it to your to-read shelf at Goodreads!

I am thrilled to join Christian Cameron, Libbie Hawker, Kate Quinn, Vicky Alvear Shecter, S.J.A. Turney, and Russell Whitfield to help retell the story of the Trojan War. But this is Trojan War as you've never seen it before, seen through the eyes of characters you may not be as familiar with...

Troy: city of gold, gatekeeper of the east, haven of the god-born and the lucky, a city destined to last a thousand years. But the Fates have other plans—the Fates, and a woman named Helen. In the shadow of Troy's gates, all must be reborn in the greatest war of the ancient world: slaves and queens, heroes and cowards, seers and kings . . . and these are their stories.

A young princess and an embittered prince join forces to prevent a fatal elopement.

A tormented seeress challenges the gods themselves to save her city from the impending disaster.

A tragedy-haunted king battles private demons and envious rivals as the siege grinds on.

A captured slave girl seizes the reins of her future as two mighty heroes meet in an epic duel.

A grizzled archer and a desperate Amazon risk their lives to avenge their dead.

A trickster conceives the greatest trick of all.

A goddess' son battles to save the spirit of Troy even as the walls are breached in fire and blood.

Seven authors bring to life the epic tale of the Trojan War: its heroes, its villains, its survivors, its dead. Who will lie forgotten in the embers, and who will rise to shape the bloody dawn of a new age?


Posted by Stephanie Thornton at 1:31 PM