I was planning to post last night about my favorite books from 2012, but then a nasty cold bug tried to take me down. Today was an ice day (no school!) so I figured some procrastinating work on my latest revision desk organization was in order. Guess what I found?!

I thought these were long gone, well, actually, locked on the old laptop with the fried hard drive. But no! So, yes, today's post is kind of like when you get dragged to someone's house to see their vacation slideshow, except this one has a history lesson too!

(You know that sounds riveting. Just nod and smile.)

So, without further ado, here's a trip back in time to Hatshepsut's Temple at Deir el-Bahri, right next door to the Valley of the Kings. 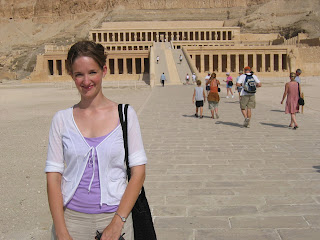 When I'm dictator of the world, I plan to sweep other tourists out of the way for my cool historical pictures. You've been warned.

Hatshepsut was Pharaoh during the New Kingdom (16th-11th c. BCE), often referred to as Egypt's Golden Age. As had many pharaohs before her, she left a trail of monuments to herself scattered about the country, the greatest of which was her mortuary temple at modern Deir el-Bahri, but called Djeser-djeseru (translated as Holiest of Holies) in her time. The temple fell into ruin in antiquity and has been rebuilt in modern times by a Polish archaeological expedition. (All of whom deserve rides on unicorns and cupcakes for life for reassembling this giant jigsaw puzzle).

Hatshepsut covered the walls of her limestone temple with scenes of offerings to the gods, the story of her divine birth (it's excellent propaganda to be the daughter of a god), and depictions of her general awesomeness (including her expedition to the mythical land of Punt, the photos of which seem to have disappeared from my file). 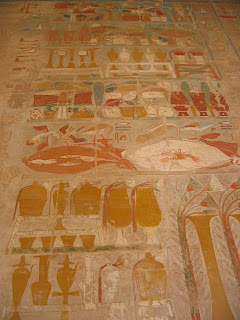 Yes, those are the original paints. Did I mention they're roughly 3,500 years old? 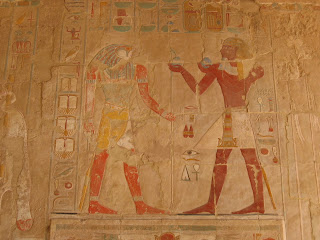 Her stepson, Tutmose, making an offering to the falcon god Horus. 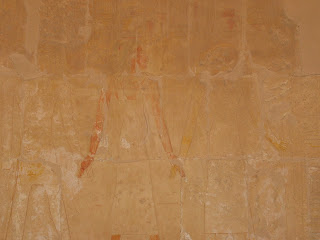 I know it's really hard to see, but if you squint you can make out Hatshepsut's mom being led to the birthing chamber to have little-Hat. And that bump that looks like she ate too much for dinner? Her 9-month pregnant belly. (The ancient Egyptians were big into body image).

So the old history books used to say that after her death, Hatshepsut's stepson took out his revenge against her (she kind of swiped his throne) by destroying all her images and temples. This doesn't really seem to be the case anymore, as most of the destruction took place at the end of his reign (if he was angry, why wait so long?) and only the images of Hatshepsut as pharaoh were erased. The new version is that Tutmose wanted to erase the aberration of a woman ruling from the history books--Hatshepsut as daughter, wife and step-mother to three separate pharaohs was fine, but she couldn't possibly be Pharaoh herself. 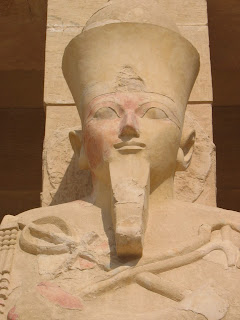 A pit was found near Deir el-Bahri containing destroyed statues of Hatshepsut (and also depictions of her possible lover, Senenmut), but those dedicated Polish archaeologists have lovingly pieced back together all those statues and put them in their original spots at the forefront of Hatshepsut's temple.

Right where they belong.

Posted by Stephanie Thornton at 4:36 PM