Today we are celebrating authors who've made it, those with books on the shelves at your favorite bookstore. You all know I'm a history nerd so I decided to focus on the best historical fiction novel I've read in a long, long time.

Mistress of Rome by KATE QUINN 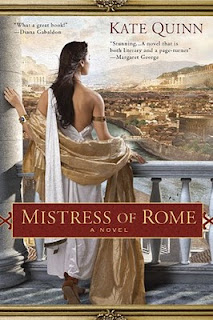 Synopsis: Thea is a slave girl from Judaea, passionate, musical, and guarded. Purchased as a toy for the spiteful heiress Lepida Pollia, Thea will become her mistress's rival for the love of Arius the Barbarian, Rome's newest and most savage gladiator. His love brings Thea the first happiness of her life-that is quickly ended when a jealous Lepida tears them apart.

As Lepida goes on to wreak havoc in the life of a new husband and his family, Thea remakes herself as a polished singer for Rome's aristocrats. Unwittingly, she attracts another admirer in the charismatic Emperor of Rome. But Domitian's games have a darker side, and Thea finds herself fighting for both soul and sanity. Many have tried to destroy the Emperor: a vengeful gladiator, an upright senator, a tormented soldier, a Vestal Virgin. But in the end, the life of the brilliant and paranoid Domitian lies in the hands of one woman: the Emperor's mistress.


My Thoughts: This book was amazing! And it's a debut novel so that's even better! I've heard agents say Rome is impossible to sell, but this was a riveting story from start to finish. My favorite character was Lepida. She reminded me of a Scarlet O'Hara you just wanted to strangle through the whole book. And talk about voice! I got excited every time the POV shifted to Lepida.

If you enjoyed the movie Gladiator, (and who didn't?) then you'll love Mistress of Rome. It's a history lesson in itself, but without ever losing sight of the plot. There is a ton of blood and gore in the Coliseum (all historically accurate) and includes an intriguing look at the Vestal Virgins and Emperor Domitian. There are also some other historical folks who show up so those cameos are like special treats if you know your Roman history. And if you don't, it's still a wild ride.

The Books That Deserve 10 Stars tour continues! (Please keep your hands and arms inside the vehicle at all times.) Head on over to Susan Adrian for the next stop! For the full list you can check out Elana Johnson's Reading List. Thanks to Elana for organizing this!
Posted by Stephanie Thornton at 7:30 PM