Okay, so I'm a huge fan of diseases. Not having them, mind you, but studying them. It's pretty amazing that we don't all die from bacteria, viruses, and prions before we hit puberty. Life in ancient Egypt was hard- the average life expectancy was about 30-35 years old. And there were a lot of diseases waiting to take you down.

Ancient Egypt actually gives history some of the earliest evidence for tuberculosis in the world. The earliest mummy found with spinal TB is actually a Predynastic female from Esna. Spinal TB is pretty cool (unless you have it of course). It actually makes your vertebrae collapse. There is evidence from other mummies and statuettes that spinal TB was present from the Predynastic period on. 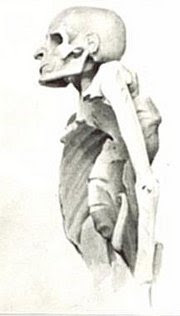 This is a sketch of an Egyptian mummy with TB. The front of the vertebrae collapse and fuse together. Once you get to that point, there's no turning back. 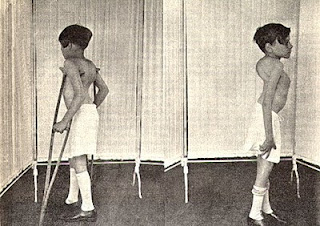 This young man is obviously not an ancient Egyptian, but gives you an idea of the seriousness of the disease. I once had a professor tell me you couldn't gauge how painful an osteological pathology (bone disease) was by looking at the bones- for that you'd have to ask the person. I'm going to hazard a guess that anyone with TB didn't have the greatest quality of life.

So, do I have anyone with TB in my novels? No, but I'm looking to inflict polio on someone soon!
Posted by Stephanie Thornton at 7:43 PM