Who the Heck is Hatshepsut? (Re-post)

I've been putting off writing a blog bio of Hatshepsut for a long time. Since I started blogging actually.

Why? Because I wanted to wait until people would actually read the post! Imagine your hero, the one person in the world you've on a pedestal, one so high you can hardly see the top. Now imagine that no one has ever heard about your hero. That's Hatshepsut.

And I want everyone to know what a superstar she was!

So, without further ado, here is Hatshepsut!

Hatshepsut was the daughter of Pharaoh Tutmose I and Queen Ahmose. (BTW- There are multiple spellings of some of these names and I'm going to use the ones I used in my book.) Her father had several other children, but all of them predeceased him except for Hatshepsut and her half-brother, Thutmosis. That's one of the hazards of living back then- life expectancies hovered somewhere around the 30 year mark.

Thutmosis was the son of the Pharaoh and a lesser wife named Mutnofret. When Tutmose died, Thutmosis became Pharaoh. His reign was short- dated anywhere from two to twelve years, but with most historians leaning toward the former. Regardless, the guy's only major accomplishment while on the throne was fathering a son with a dancing girl named Aset and Hatshepsut's daughter, Neferure.

Aw, what a shame. But not really! Thutmosis kicking the bucket allows Hatshepsut to become regent to her toddler stepson. (And yes, little Tutmose would also be her nephew since he's her brother's kid.)

Hatshepsut sits by dutifully for seven years, ruling for Tutmose like a good little regent. But then, for whatever reason (and we don't really know what this reason is) she declares herself Pharaoh. 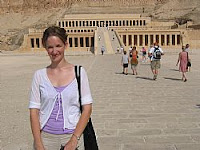 But Hatshepsut's reign was a total success. She went on to built the architectural marvel of Deir-el-Bahri (there I am in front of it!), organize an expedition to reopen trade to the mythical land of Punt, and keep the peace in her country for a couple decades.

Hatshepsut disappears from the historical record around 1482BCE and then Tutmose gets to take his place on the throne. Late in his reign all references to Hatshepsut as Pharaoh and all her monuments and statues are destroyed. Historians used to think this was an act of revenge against his usurper stepmother, but now it's believed it was merely to secure later successions and erase the aberration of a female ruler from Egypt's history.

Hatshepsut may not be as famous as Cleopatra VII (who lost the entire country to Rome, by the way), but of all the women Pharaohs, Hatshepsut was by far the most successful. In fact, even compared to the entire list of Egypt's rulers, Hatshepsut would still rank up there in the top five. I'm biased, but I'd say she only comes behind Ramesses II and he lived so long (ninety-some-odd-years-old) that his death sunk the country into a slump from which it would never recover.

So yeah. Hatshepsut is a rock star!
Posted by Stephanie Thornton at 6:00 AM