The Mummy of Seqenenre Tao!

Seqenenre Tao II (I do not make these names up, I swear) was the almost-founder of ancient Egypt's New Kingdom. I don't want to bore you all with a run-down of Egypt's eras (we'll save that for another post), but essentially Tao wanted to take Egypt back from the Hyksos invaders who controlled the country during the Second Intermediate Period. He failed, but his son finally succeeded a few years later, ushering in the 18th Dynasty (Hatshepsut's dynasty!).

Why did Tao fail? Because he got hit in the head with an axe. 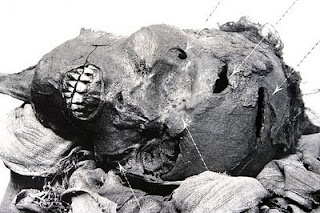 See that long blow at the top of his head? That's the spot. And the other arrows point to the spear that went through his skull.

Based on the angle of wounds in his neck it is probable that Tao was lying down when the fatal blows were struck, possibly in battle or while he was asleep (but certainly not both). There are no wounds on his hands to indicate a struggle. However, because his mummification was fairly shoddy (the embalmers didn't even attempt to remove the brain), it has been hypothesized that he died in battle against the Hyksos and not at court.

If you're interested in reading more about Tao and his family, Pauline Gedge wrote a trilogy of books about the time period- The Hippopotamus Marsh, The Oasis, and The Horus Road.

I hope I didn't gross anyone out with the mummy pic!

Photo from About.com.
Posted by Stephanie Thornton at 8:14 PM