All the inscriptions and pictures of people in ancient Egypt are like this one- svelte Pharaohs, nobles, and gods, each individual equipped with rock hard abs and buns of steel. But was this the reality?

I get a kick out of the Egyptians when it comes to body image- they were masters at airbrushing. In Hatshepsut's mortuary temple at Deir el-Bahri there is a scene where her mother is being led to the birthing chamber, minutes away from Hatshepsut's glorious entrance into this world. The picture?

Yes, that little bump on Queen Ahmose's belly is the evidence that she was nine months pregnant. So cute, right?

However, meandering a little further down the temple, one sees a depiction of the queen of Punt, a land Hatshepsut reopened trade with and now believed to be somewhere near Somalia. The Egyptians were impressed with the myrrh trees and the Puntians (Puntites?) houses built on stilts. But they were even more impressed by corpulent Queen Ati, evidence of which was also preserved for eternity on Hatshepsut's temple. They recorded that it took six men to carry her around too. 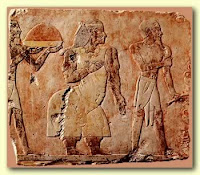 She wasn't Egyptian so I guess they didn't feel the need to airbrush her. Poor Ati- one of the only images of obesity in all of ancient Egypt.

So what about Hatshepsut? Her mummy has been found (thank you Zahi Hawass!) and even Hawass was hesitant to identify that particular body with Egypt's greatest female Pharaoh Egypt until hard forensic evidence linked the two with irrefutable proof. Why? Because Hatshepsut's mummy was obese to the extent that she was likely diabetic and had to be eviscerated through a U-shaped incision in her abdomen instead of through the side as was customary. Zahi Hawass, Egypt's Secretary General of the Supreme Council of Antiquities described the mummy as a "very large, fat body with huge pendulous breasts."

I guess ruling a kingdom during its golden age takes its toll, eh?
Posted by Stephanie Thornton at 1:45 PM