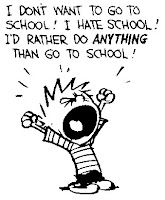 Someone needs to tell my principal that it's incredibly inconvenient to expect me to teach American history to 125 teenagers when I'm supposed to be writing. But whoever mentions that should also mention that I still want direct deposit for my paychecks.

I guess it's a lot to ask for time in the day to write when I can barely find the time to eat. School started on Wednesday and while still sporting the crazed teacher look, I think I'm starting to get back into the groove. And I'm pretty excited because a few days ago I finally finished the last chapter and the epilogue of my book- just in time for the madness to commence. I'd been waiting to write the end until finishing the first edit because I wasn't sure I liked where the story was headed. But I think it's in a good place now and after a gazillion proofs it might be ready for querying!

But that's a topic for another day.

Today's topic? This afternoon as I was grading my kids' first writing assignment I discovered they can already write!

Yes, I almost fell out of my chair.

Their sentences are coherent, spelling errors were few and far between, and some of them even used metaphors. That was pretty impressive considering these were summaries on a nonfiction history book. So now I feel like I can get creative with them. Yahoo!

So then I got to thinking about where I learned to write. Obviously I picked up the mechanics from my English teachers, a pretty amazing bunch of women who have since retired. But nitty gritty writing, the kind you use for storytelling? I definitely picked that up from writing online. Panhistoria has been a great place for me to experiment and also to learn from other people. I've picked up a lot about plot, character, and even mechanics just from practicing there. I also discovered that I really hate writing in first person. I only managed two first person posts with a character there and I had to stop. My guess is each of us has learned in different places, but only through practice and experimentation.

Care to share? Where did you learn to write?
Posted by Stephanie Thornton at 8:39 PM